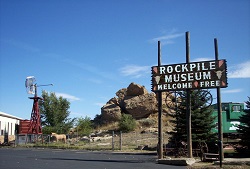 The Campbell County Rockpile Museum opened its doors to the public on July 21, 1974. Ralph A. Kintz was the driving force behind the establishment of the museum, purchasing the land where the famous rock pile sits and then donating this property to the county in 1970.

Earnest “Buster” Lynde, an early resident of Gillette, composed a poem in 1958 entitled "A Plea For The Old Rock Pile," imploring the county not to move the familiar rocks from the land. Nearly 50 years later, the rock pile stands in its same spot for visitors and residents to enjoy.